Meet Alex Rymkevich of BonMot.ru – the online lifestyle destination, from Moscow to the world

MNSWR > Interview > Meet Alex Rymkevich of BonMot.ru – the online lifestyle destination, from Moscow to the world

Meet Alex Rymkevich of BonMot.ru – the online lifestyle destination, from Moscow to the world 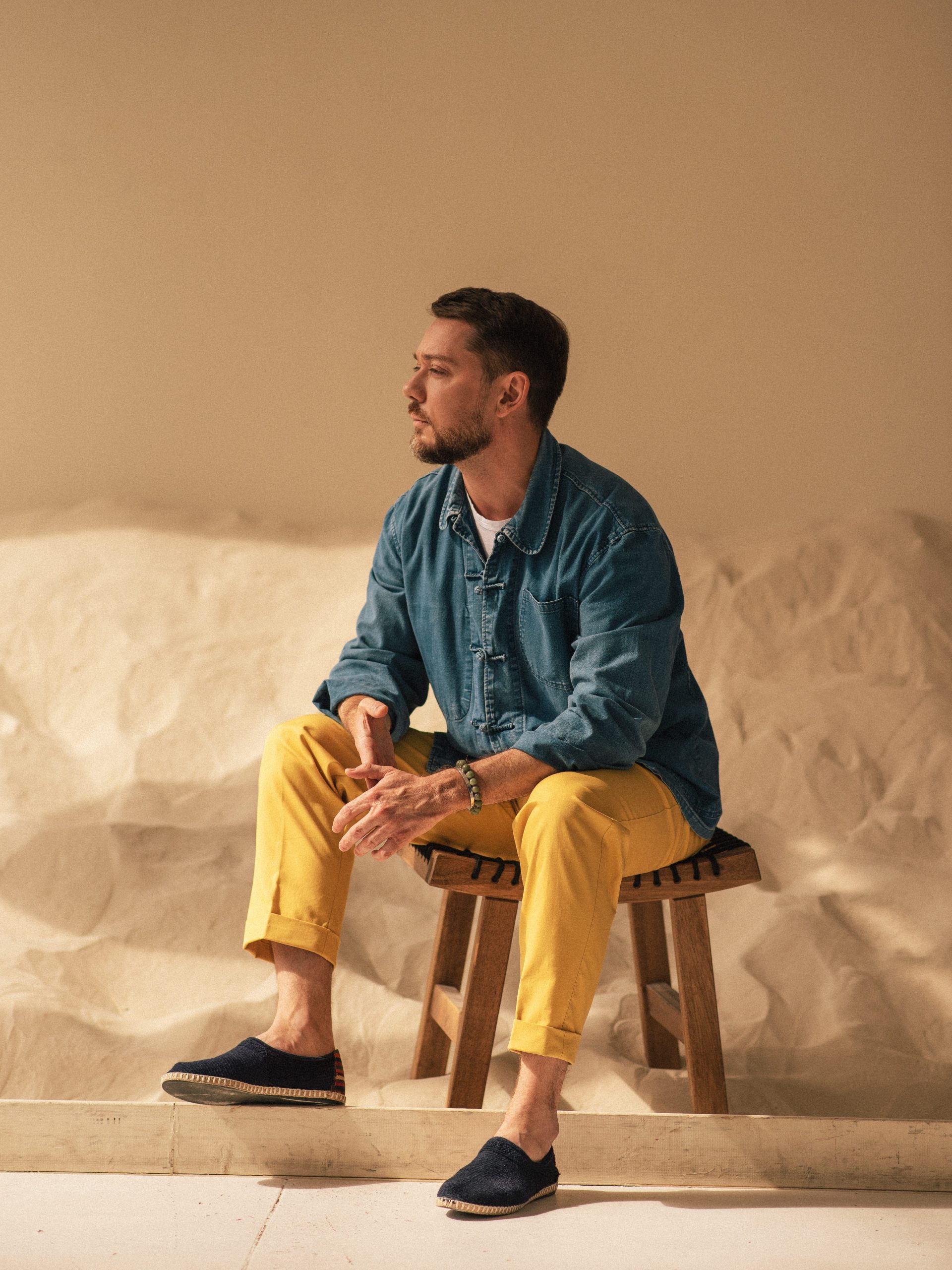 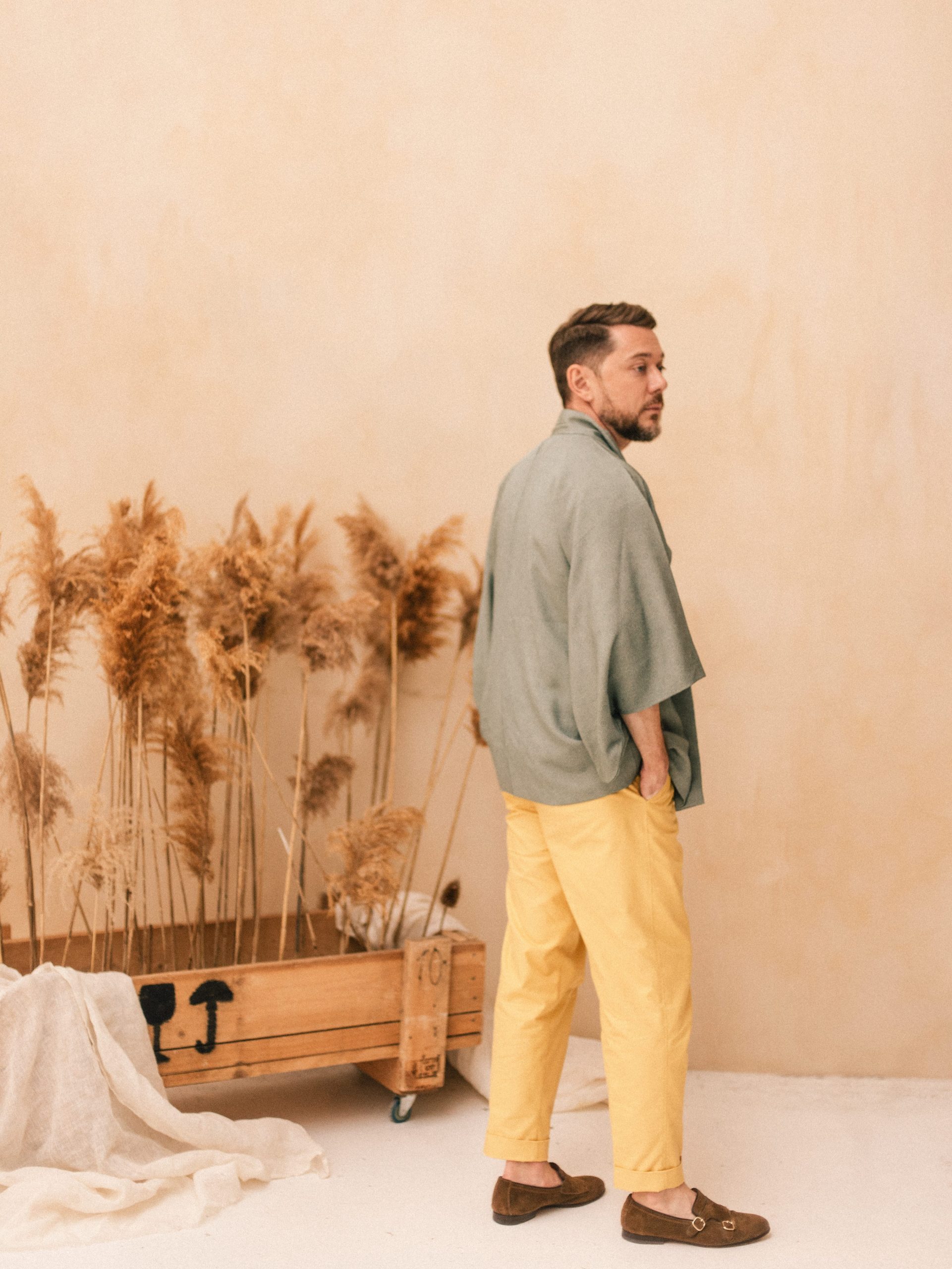 Who are you? Please tell us a bit about yourself.

I am a journalist from Moscow with over 20 years’ of working experience in various publications, including as the editor-if-chief of  Robb Report Russia and The Rake Russia. Now I am developing my own media resource about menswear and lifestyle called Bon Mot.

How would you describe your own style?

It is not an easy task for a fashion journalist who is used to analyzing and describing someone else’s style, to talk about his own style. I would say that in my case, comfort (in form of casual style) fights against the classics, and at different moments one of them takes over. In short, my style is a mixture of modern classics, vintage and some exotic elements, which are now classified as appropriation. 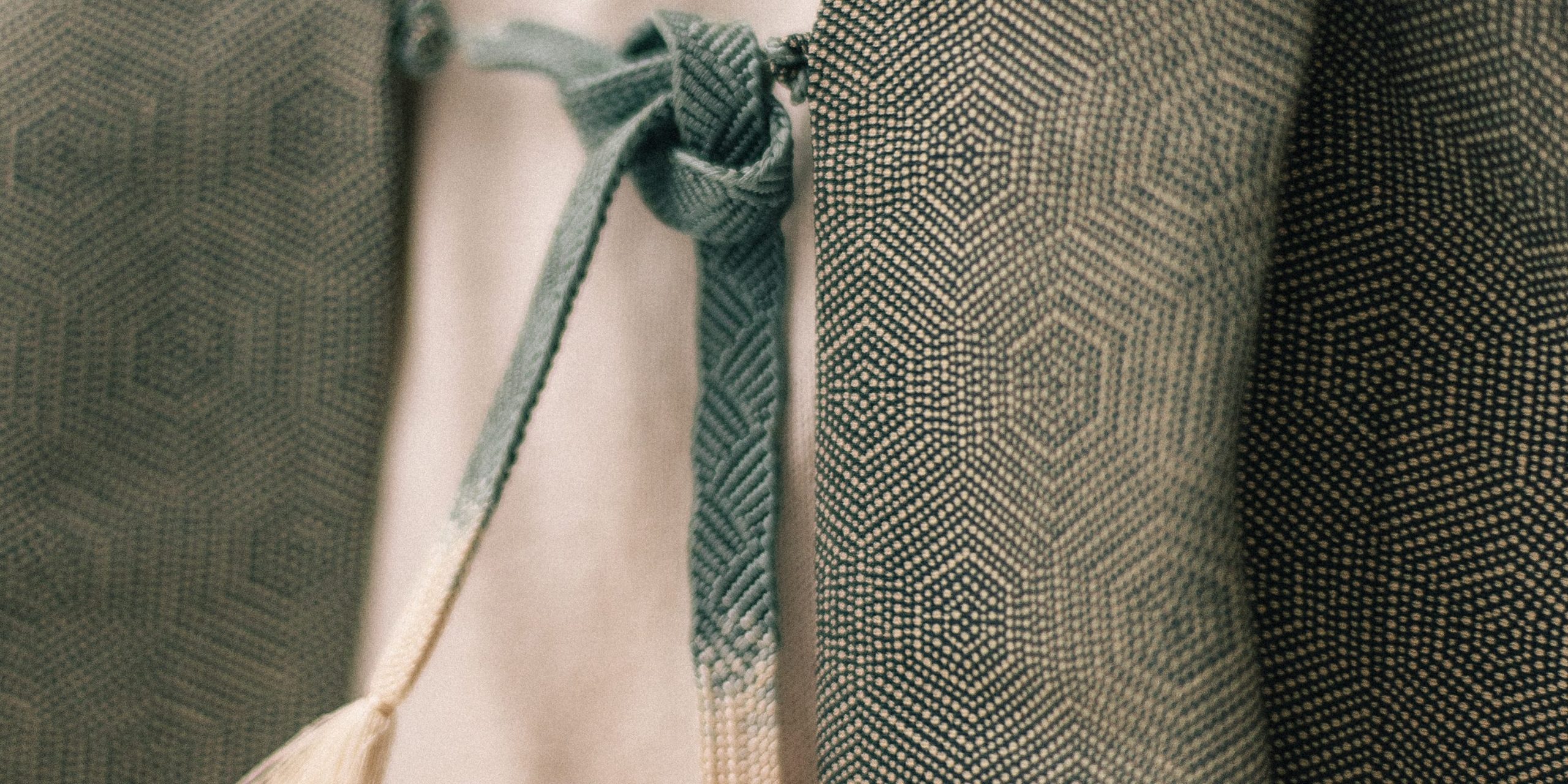 What is your earliest memory related to menswear and style?

Surprisingly, they are associated with the early post-Soviet period. I distinctly remember when we were allowed to come to school not in a blue uniform, but in a regular suit (I was then in fifth or sixth grade), and my mother bought me a Prince of Wales check suit. Where she got it in those years of total poverty, I don’t know, but I remember very well how I stood out among my classmates who were wearing school uniforms.

What inspires you / How do you find inspiration?

Travel, art in all its forms and appearances, and of course talented witty people with unusual tastes.

Do you have other passions apart from great style?

Can one call travel a passion? It is as important to me as air. I am convinced that we are truly cultivated by encounters with other cultures and people. Also one of my big interests is crafts. And it doesn’t matter whether they are related to fashion, or whether it is, for example, the manufacture of copper dishes by a tinsmith in the Arab quarter. I admire people who have craftsmanship at their fingertips. Because the only thing I can do with my hands is to type. But maybe over the years I will also learn something. 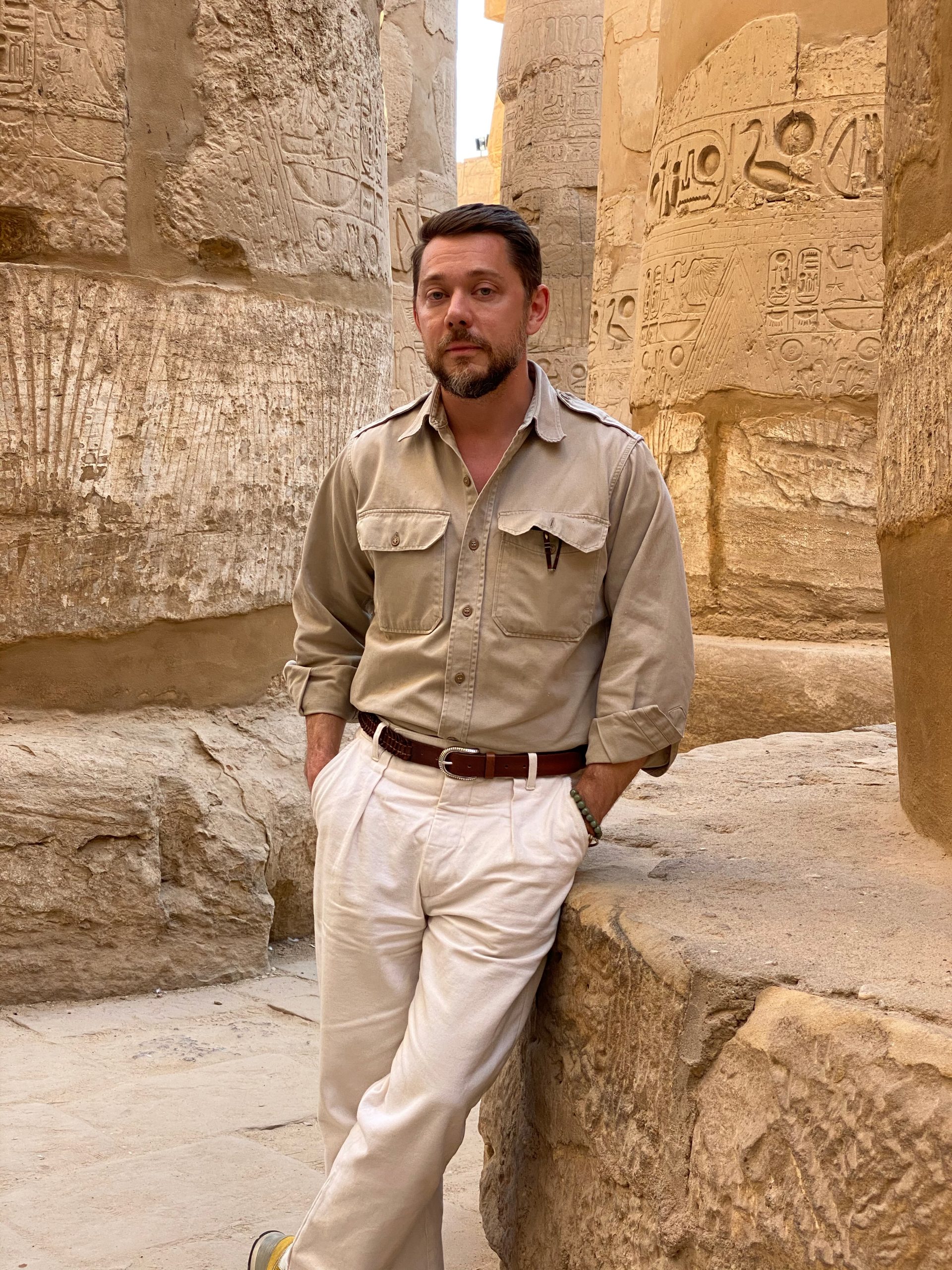 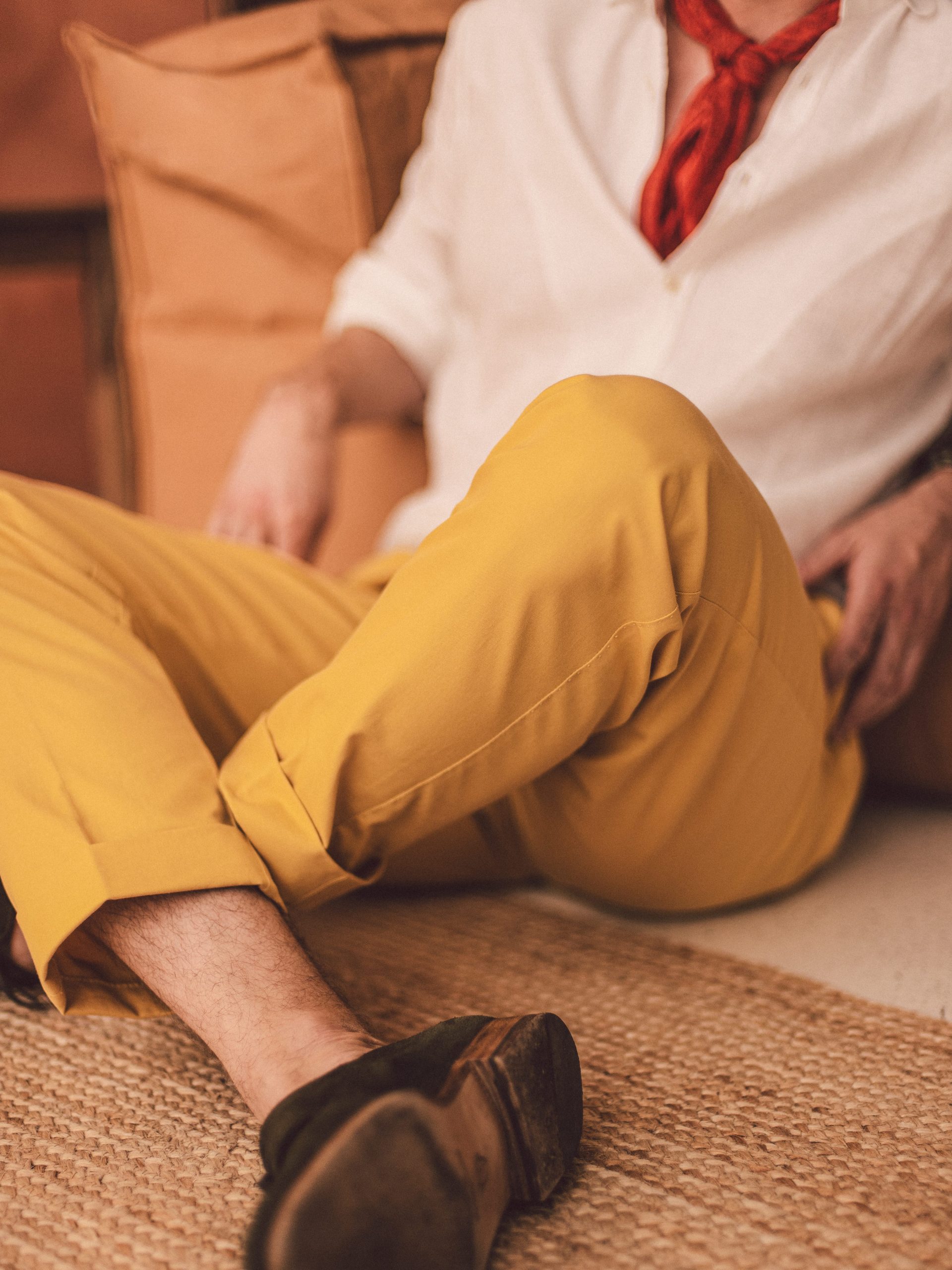 If you had to name one person that has had the most influence on your style, who would that be?

There is definitely not one such person, many people have influenced my taste and point of view on many things. Among them are writers, journalists, filmmakers, photographers, and I’ve not met all of them personally.

How would you describe the Italian menswear scene?

Today Italy produces the lion’s share of quality men’s clothing and I can talk endlessly on industry’s specifics. I would rather say that I like the passion and love of life of the southerners and, of course, I recognize the merits of the Neapolitan and Abruzzo tailoring schools, but I prefer the Northern Italian style. I consider Milan and Turin to be some of the most elegant cities in the world, along with their inhabitants.

How do you evaluate the Italian market in terms of sartorial menswear? Are there any trends? Your preferred brands?

I would say that in general, not only in Italy, the market for bespoke tailoring is somewhat overheated and over the past 10 years we have seen a constant rise in prices. When it comes to trends, they are driven by several ateliers with a good presentation on social and traditional media. I rather like that the waves they create in Milan, Rome, Florence, Naples diverge so far that they reach the shores of Sweden, Korea, Japan and, of course, Russia. And already local masters pick up these tendencies and ideas and interpret them in their own way, often very interestingly. But still, in the art of sprezzatura, no one can compete with the Italians. This is, if you will, their genetic advantage. As for the Italian ateliers, which I like and whose customer I have been more than once, I would single out Sartoria Ripense in Rome and NH Sartoria in Milan.

And how would you compare it to the Russian market?

The Russian market is also quite speculative and murky. Taking advantage of the inexperience of clients, they often pass off mtm for bespoke. Russian men still need a little more education and observation in terms of fashion. Here, undoubtedly, they understand the value of a tailored suit, but they do not always understand what determines its price. This takes time, as well as the development and education of taste. However, Russians learn quickly.

Tell us a bit about your company, what is its secret or what is unique with what you are doing?

For the past ten years I have been trying to sit on two chairs. I am developing a network of barbershops Mr. Right, which I opened together with partners, when the very word was a novelty for the Russian ear. I also continue to do fashion journalism, trying to reorganize and work with new media, and give marketing advice in the field of fashion in the Russian market. 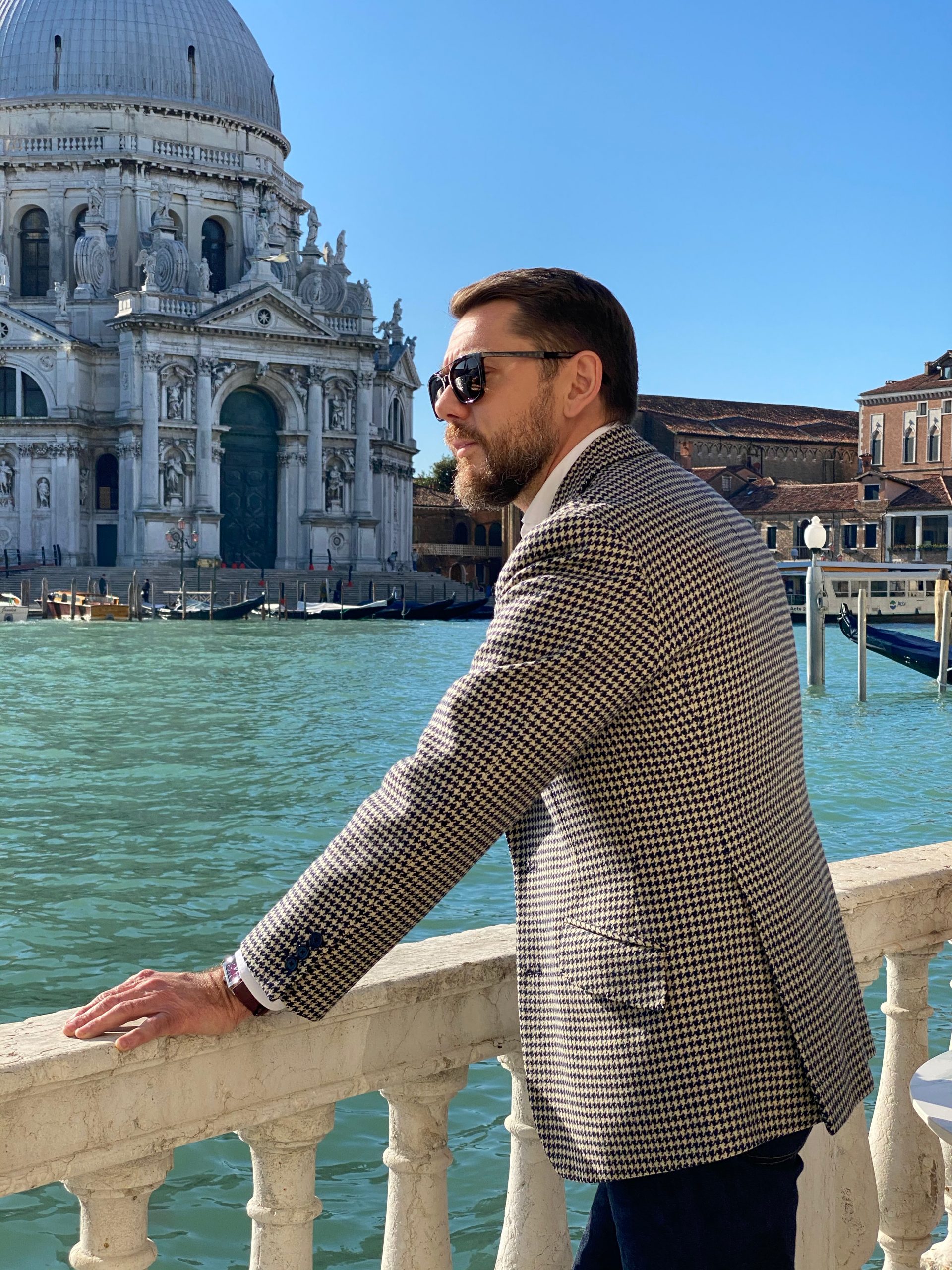 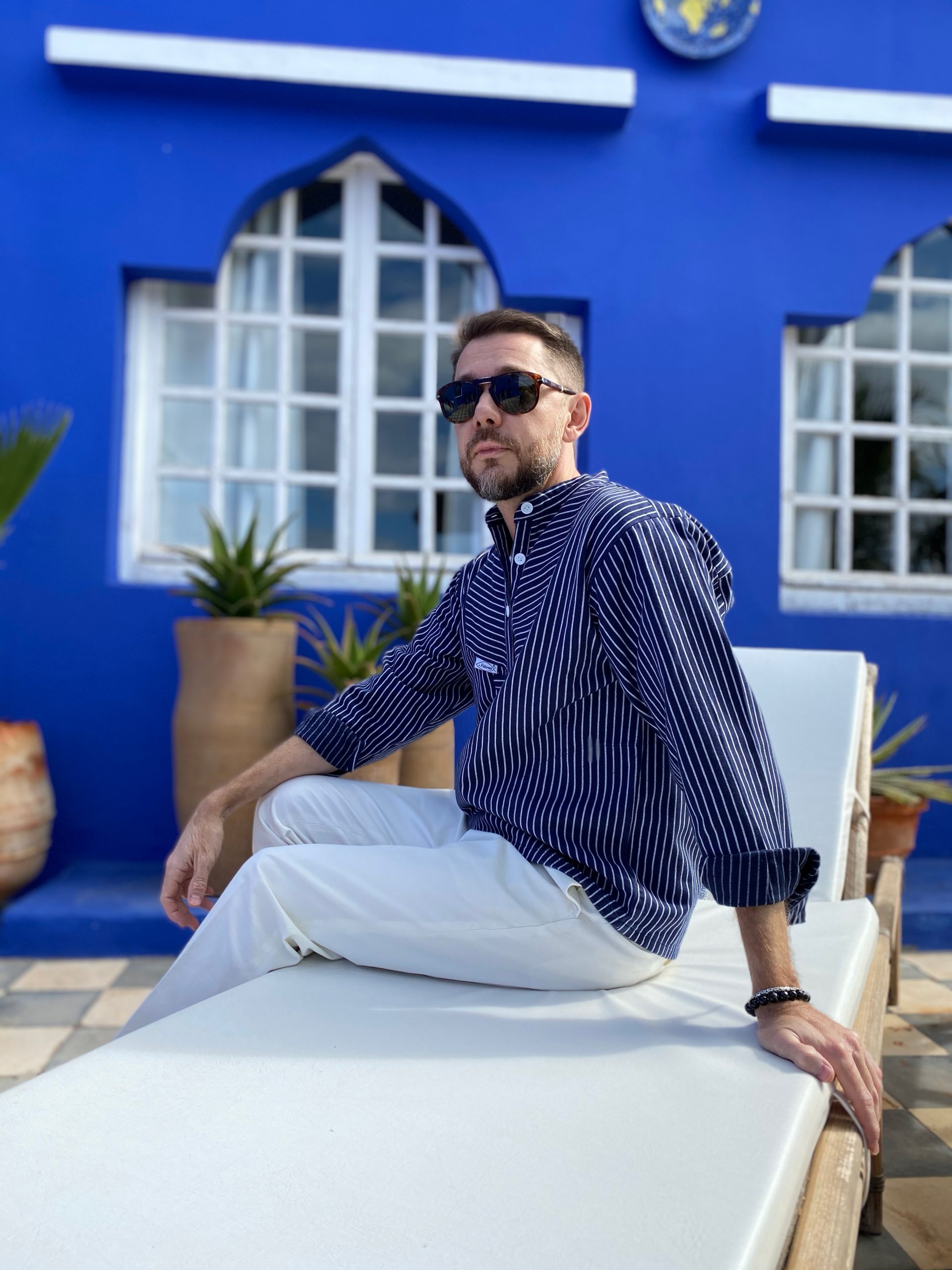 What is your number one suggestion to men who want to learn how to dress better?

Don’t learn from social media. Buy a ticket to Milan, spend a couple of hours in the Pinacoteca, and then sit somewhere on the terrace away from the tourist routes – on Corso Magenta or in the Liberty quarter near Piazza Eleonora Duse and just watch the people. You may get a tachycardia from the amount of espresso you drink, but you will receive a valuable lesson in style.

How have these crazy times affected you? Any positive sides?

I would like to be able to cheerfully answer that the pandemic has given me precious time to look around, understand where to go, and that I am full of plans and am moving towards their implementation with leaps and bounds. But no. I, like many others, am trying to figure out how to live and work in this new world. If anyone already knows, please share your answer.

In terms of menswear, can you mention any essentials in your wardrobe for summer 2021

Linen trousers, oversized shirt and espadrilles. I do not even mention a jacket, because when I write these lines, in Moscow the temperature is +36 degrees.

How would you start building your wardrobe, any advice or secrets?

Start simple and do the best you can afford without going broke. Never buy anything that is recognizable from over 100 meters away and that magazines call the must have of the season. Six months later, you will ask yourself – where were my eyes !?

Do you think that print has a future?

I am convinced that a print can live on one condition. It needs to get rid of all the tinsel filling the pages. A magazine should be done with the same approach as an art album: to end its days not in the trash can, but in the library.

In this beautiful and furious world? I’ll think about them a little more … 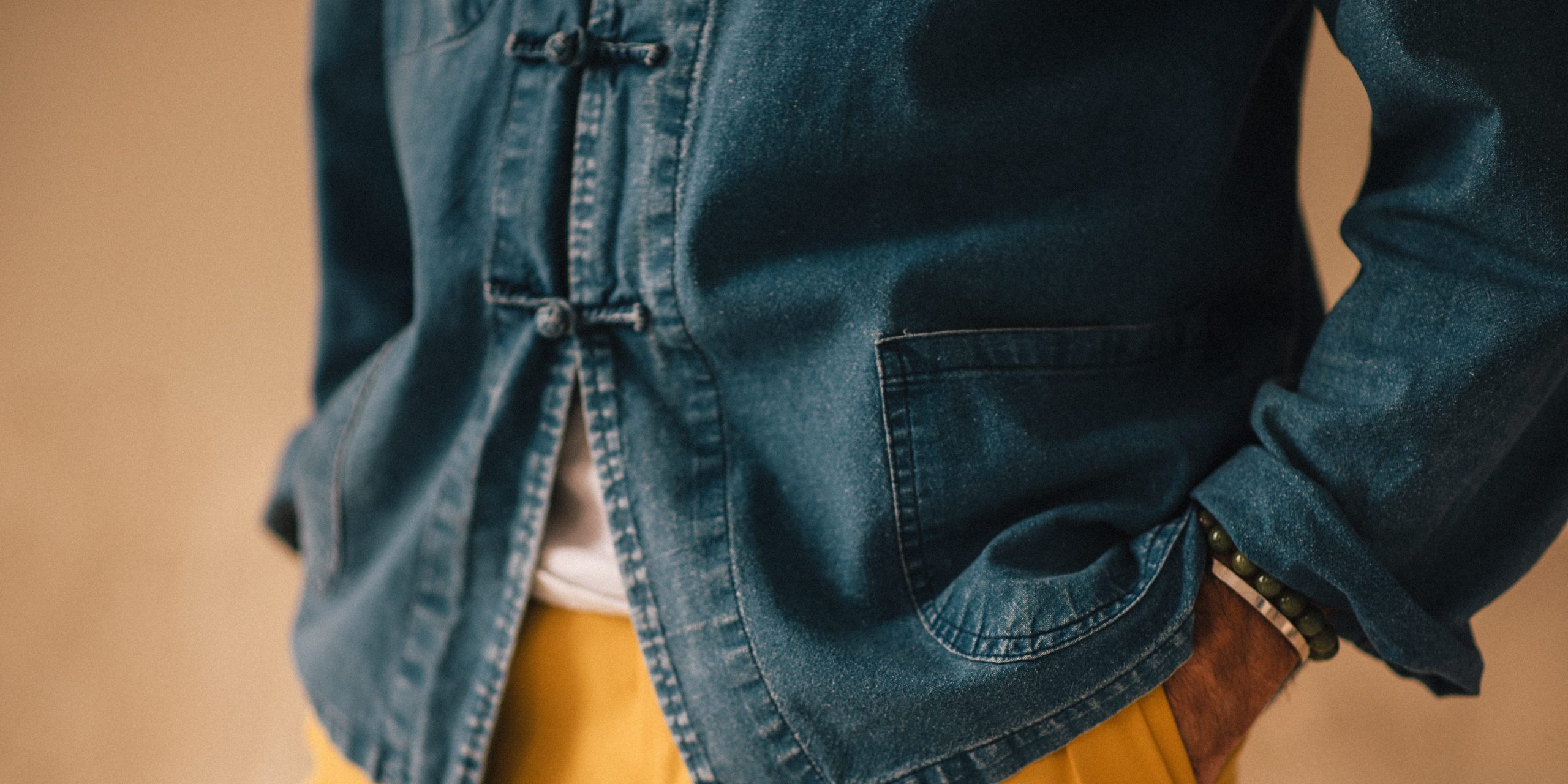 Brand control for the end:

Ties: Bigi Gravatte for silk a jacquard ties, Schostal Rome for knitted ones

Jacket: my favourite bespoke ones are from Sartoria Ripense Rome and Ostojenka Bespoke Moscow, rtw – Belvest

Cigar: I admire cigar culture, but can’t enjoy it as I have severe allergy to tobacco 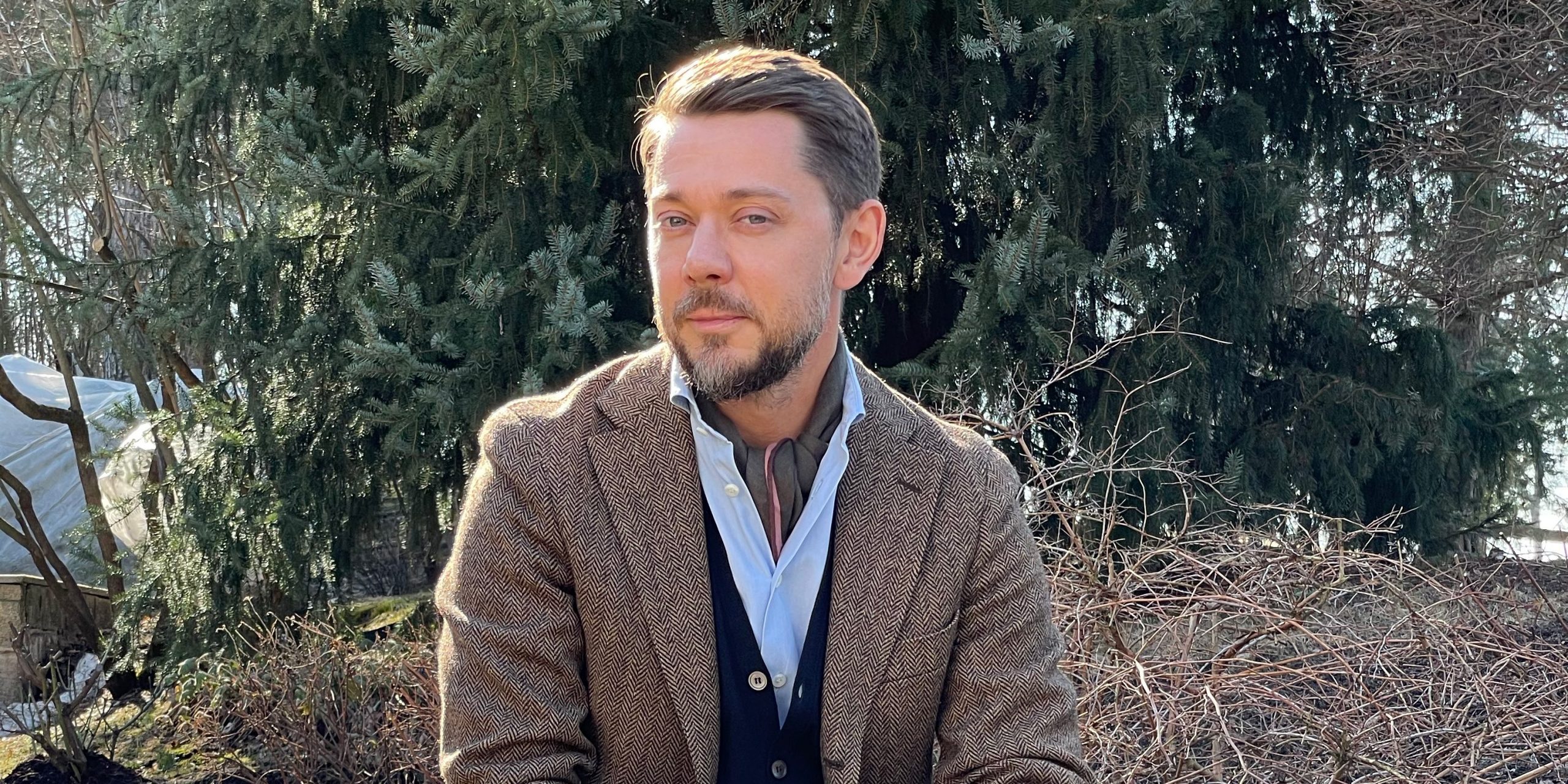